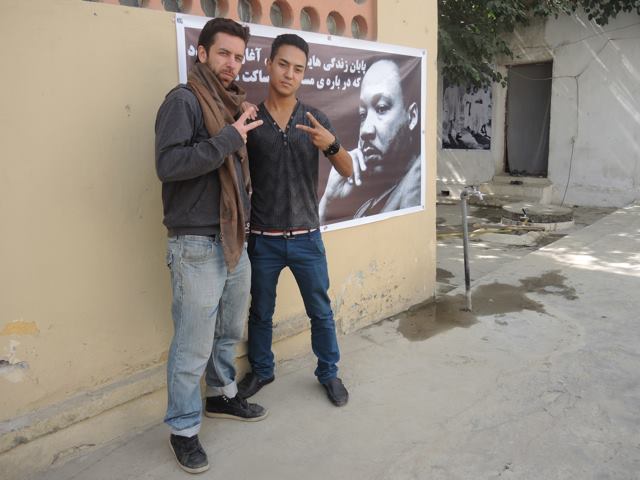 The Afghan Peace Volunteers and Luke Nephew of The Peace Poets

The 12th Anniversary of the United States War in Afghanistan.

Me and other Youth in Afghanistan worry we will not make it alive to visit our families for Eid,

Women in Afghanistan are still sold and traded, beaten and degraded

Afghan women have committed suicide so far in 2013

For a chance to sleep through the night in peace

As the war turns 12, We, the young people are 75 percent of society,

But we struggle for basic education.

We are searching for a peace and unity we have never seen.

but We ask why!

Why do they think they should not be held responsible

and demand their government stop this war, respect the human rights of everyone in Bagram and Guantanamo bay, WE say Salaam Alaykum, peace to all people, As the war turns 12:

The people of Afghanistan WANT

Enough peace to hear the music of their land,

the laughter of their children,

going to be destroyed

But war turns people into enemies

War turns, us against, each other

But we turn, toward each other

to love all sisters and brothers

We will turn this war torn nation

Back into a place where we can dance

And that is our dream,

This war will never turn thirteen…