Click below for more information on The Peace Poets’ performances.

The Peace Poets debut album, State of the Art, was engineered by Grammy Award recipient Mikaelin “Blue” Bluespruce, and it’s release was emceed by Toni Blackman and djed by Scram Jones. On their From The Ground Up Tour, The Peace Poets shared the stage with Jessica Care Moore and Denice Frohman. M1 of Dead Prez was the opening feature for the release of The Peace Poets’ mixtape, Silver Lining, emceed by Elizabeth Acevedo. The Peace Poets deepened their relationship with the Native community while on tour with artist organizer Davidica Little Spotted Horse on the Pine Ridge Reservation and ended their tour sharing the stage with Hip Hop and rock band, Flobots. 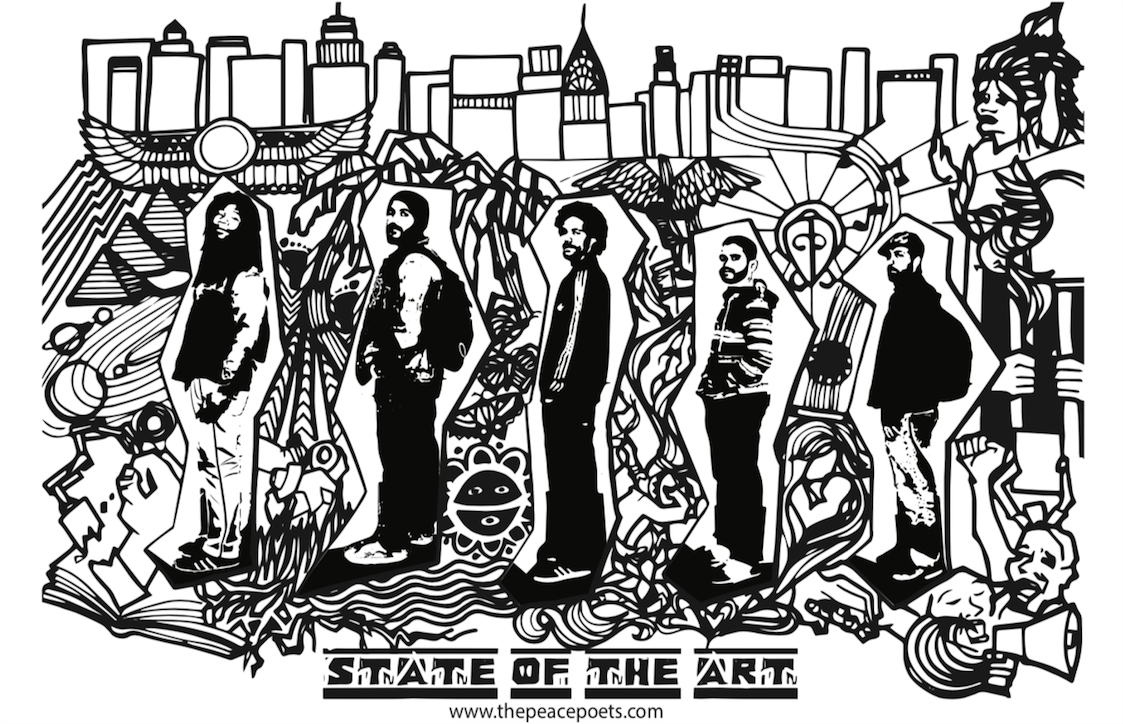 The Peace Poets wrote the Movement Music (MM) song, I Can’t Breathe, in protest of Mr. Eric Garner’s murder by the NYPD and it continued to go viral as actor, Samuel L. Jackson, was quoted by USA Today “challenging his fellow celebrities and others to sing what’s becoming the anthem of the anti-police brutality movement.” Groups across the country used The Peace Poets’ MM song, Listen Auctioneer, to interrupt foreclosure auctions across the country. Listen Auctioneer went viral and Rachel Maddow said it was “…so beautiful that it might be the end of, ‘hey hey ho ho…’”

The Peace Poets joined civil rights activists Peter Yarrow, Keith Secola, and Nahko Bear, and performed MM at the Unity Concert in Rapid City, SD demanding that the federal government return the Black Hills to the Lakota people. During the relaunch of Martin Luther King, Jr.’s Poor People’s Campaign, Billboard Magazine covered The Peace Poets as they performed MM and shared the stage with Sweet Honey in the Rock, Aloe Blacc, and Maxwell.

The Peace Poets produced a live Spoken Word poetry album, Word is Bond, scored with original Hip Hop music, and they produced two theatrical Spoken Word poetry productions, Barrio Libre, and, Living in the Vision, directed by Baba Israel. The Peace Poets published 3 literary and poetic works, Word Life, Live from The Belly, and There Is A Man Under That Hood: Closing Guantanamo and Ending Torture in the Age of Trump.

The New School awarded The Peace Poets with the Civic Language Arts Grant to teach a course on the history of protest music and poetry in 2016. The class, titled after the name of their performance poem, Peace to the Poets, was awarded the grant again in 2017 and 2018. The Peace Poets have been invited annually to be featured performers for The Brotherhood/ Sister Sol’s prestigious Voices Gala where throughout the years they have honored Harry Belafonte, Cornel West, and Susan L. Taylor. The Peace Poets have been featured artist at National Youth Event, “Believe,” in Lake Buena Vista, Florida performing Spoken Word poetry for 4000+ youth. The Justice Committee honored The Peace Poets with an award for their social justice commitment and The Peace Poets joined other leaders such as Harry Belafonte in receiving The Peace Award from The War Resisters League. 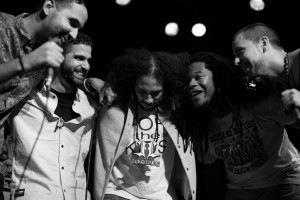 They have shared their art at The Nuyorican Poets Café, The Bowery Poetry Club, BAM (Brooklyn Academy of Music), Bar 13, Gotham Hall, Jazz at Lincoln Center, and The National Black Theater in New York City, Busboys and Poets in Washington, DC, Yerba Buena Center for the Arts in The Bay Area, C.A., and in colleges and universities nationally and abroad. Stanford University professor, and author of Can’t Stop, Won’t Stop, Jeff Chang, cited and celebrated The Peace Poets musical contribution to the Movement for Black Lives in his book, We Gon’ Be Alright: Notes on Race and Resegregation.