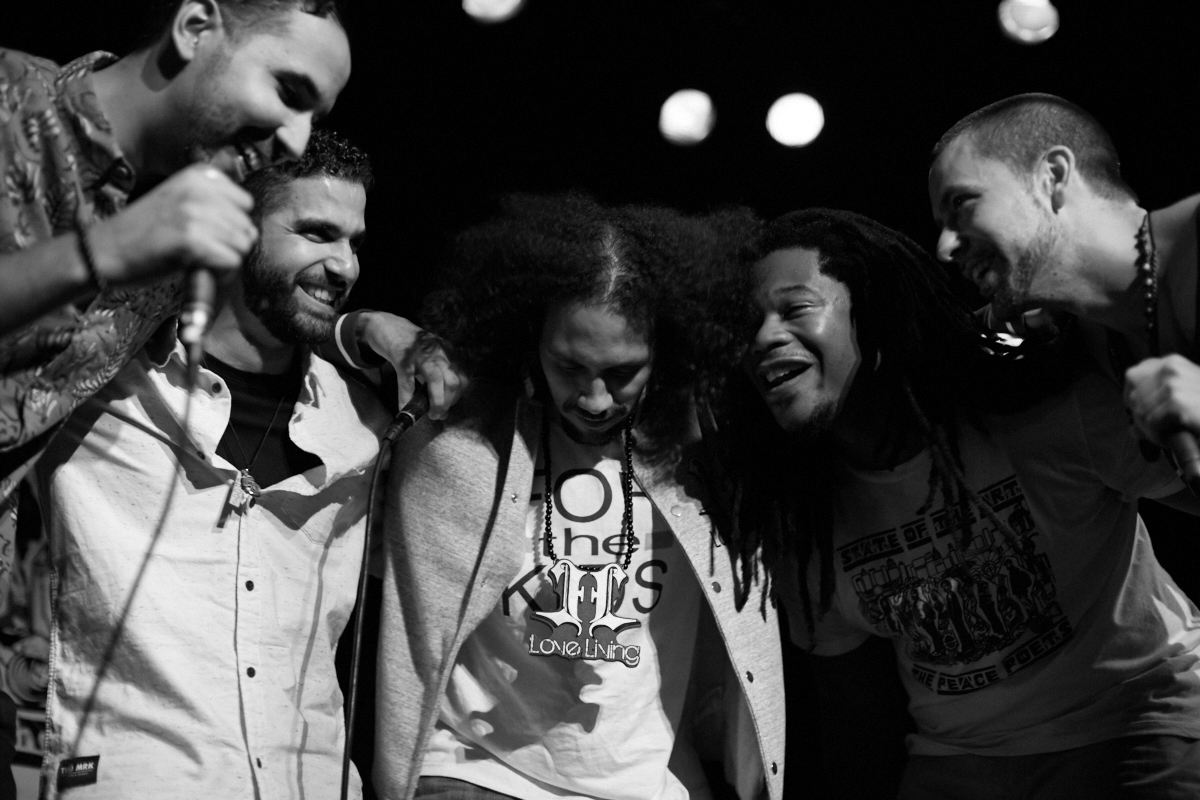 The Peace Poets are family born of Hip Hop, heart, and hope in New York City.  Some have been friends since as early as three years old and over time they have built an artist collective of poets, Hip Hop performers, and educators founded on this friendship and their common love for community and creative expression. Grounded in the power of personal narratives and community, The Peace Poets create and have shared Spoken Word poetry, rap, and Movement Music that responds to social and political crisis in over 40 countries.

The Peace Poets song, I Can’t Breathe, written in protest of  Eric Garner’s murder by the NYPD continued to go viral as actor, Samuel L. Jackson, recorded himself singing I Can’t Breathe, and was quoted by USA Today “challenging his fellow celebrities and others to sing what’s becoming the anthem of the anti-police brutality movement.”

Rachel Maddow has said of one of their songs, that it was “…so beautiful that it might be the end of, ‘hey hey ho ho…’”

The Peace Poets have performed and recorded music with civil rights activists, Peter Yarrow and M1 of Dead Prez, and they have shared the stage with Keith Secola, Nahko Bear, Sweet Honey in the Rock, Aloe Blacc, and Maxwell, and were the opening act for Common.

The Peace Poets have organized youth conferences with The W.K. Kellogg Foundation, The American Civil Liberties Union of Mississippi, and National Youth Event. Columbia University partnered with The Peace Poets to facilitate professional development seminars for their educators. The New School awarded The Peace Poets with the Civic Language Arts Grant to teach a course on the history of protest music and poetry in 2016. The class, titled after the name of their performance poem, Peace to the Poets, was awarded the grant again in 2017 and 2018.

Stanford University professor, and author of Can’t Stop, Won’t Stop,  Jeff Chang, cited and celebrated The Peace Poets musical contribution to the Movement for Black Lives in his book, We Gon’ Be Alright: Notes on Race and Resegregation.

The Peace Poets artistic works include their debut album, State of the Art and collaborative mixtape, The Silver Lining, both engineered by Grammy Award recipient, Mikaelin “Blue” Bluespruce. The Peace Poets published There Is A Man Under That Hood: Closing Guantanamo and Ending Torture in the Age of Trump and Off The Subject which included a foreword by prolific poet, the late Sekou Sundiata, and an afterword written by renowned poet Nikki Giovanni. The Peace Poets published 3 chapbooks; Word Life, Word is Bond, and Live from The Belly. The Justice Committee honored The Peace Poets with an award for their social justice commitment and The Peace Poets joined other leaders such as Harry Belafonte in receiving The Peace Award from The War Resisters League.

They have shared their work at The Nuyorican Poets Café, The Bowery Poetry Club, BAM (Brooklyn Academy of Music), Bar 13, Gotham Hall, Jazz at Lincoln Center, and The National Black Theater in New York City, Busboys and Poets in Washington, DC, and Yerba Buena Center for the Arts in The Bay Area, CA, and in colleges and universities nationally and abroad.

The Peace Poets have made an indelible mark on the social movements of our times by supporting the re-emergence of the art of collective singing in action. These poets and emcees turn stages and streets into profoundly human gatherings, where all are invited to become the creators of a world worthy of all future generations. They invite you to join them in the joy of celebration and in the healing power of connection. They hope that someday soon, they can connect and create with you.