It was beautiful to see many of them present today in NYC with their spirits on fire. Joined by a few hundred youth, students, activists, and New Yorkers, we were calling for a national boycott on Wendy’s and demanding that their chairman, Nelson Peltz, sign on to the Fair Food Program.

The Fair Food Program would not only help provide a more dignified living wage for it’s workers (by paying only $0.01 more per pound of tomatoes picked), but it would help reduce the sexual violence that women are facing daily while working for Wendy’s. Under Nelson Peltz’s corporate leadership, Wendy’s currently buys tomatoes in Mexico at exploitative prices and creates an unsafe workspace where women are not protected from sexual harassment or assault, and are violated further for voicing the abuse they have endured.

One of the leaders left us with the insight that we may not receive our victory today, or the day after that, but she is confident and knows that we will win this battle. #BoycottWendys 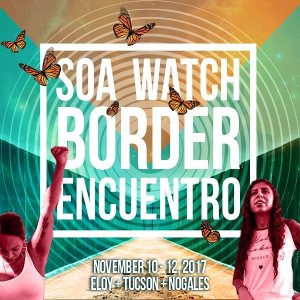 November 9th – 12th, The Peace Poets arrived in Tuscon, Arizona to join families, artists, activists, educators, puppetistas, and organizers in song, prayer, celebration, vigils, and actions gathered for the SOA Watch Border Encuentro. It was beautiful to walk with family from Cosecha, Witness Against Torture, Veteran’s For Peace, Code Pink and so many others protesting the imaginary border constructed with iron walls and violently real consequences, and to demand an end to US intervention and militarization in Latin America through their torture filled curricula taught at WHINSEC (Western Hemisphere Institute for Security Cooperation) formerly known and still referred to as the School of the Americas.

It was an already very emotional moment in front of the Eloy Detention Centerthe night we arrived. We sang chants and songs and families shared personal narratives of their experiences of loved ones or they themselves being detained at Eloy.  Of the 250 detention facilities in the country, Eloy alones makes up a total of 9% of inmate deaths, including the highest percentage of inmate suicides. Undocumented families targeted in the desert face many dangers including the harsh climate of intense dehydrating heat and cold nights, helicopters sweeping down to blow dusts that blind migrants and push them into the dangerous terrain of cacti, and the armed agents who seek to kill or detain them at Eloy Detention Center amongst other perils. Eloy is a private prison contracted by ICE (Immigrations and Customs Enforcement) and owned by Core Civic (previously CCA [Corrections Corporation of America]).

We faced the Eloy prison with glow sticks fashioned into bracelets and necklaces so that our detained family would not only hear our songs to them, but so that they could also see us from inside their prison cells. It was such a moving and powerful moment when detainees took their blankets and would cast them against the lights in their rooms to let us know that they could see us, they could hear us, and that we were together.

The following day we gathered and protested in front of the federal courthouse enforcing Operation Streamline, the federal government’s zero-tolerance approach to “streamline” or prosecute, try, and process groups of up to 70 people at a time. Having been inside the courthouse the previous year, made the reality of the violences of the border so much more tangible while seeing 50 – 70 indigenous people shackled in chains. For first nation’s people, migration is equivalent to sovereignty, and their is a cultural and spiritual connection to the lands. We mourned in the thick air of injustice, oppression, and anguish in the courtroom, where indigenous individuals were being grouped and labeled illegal and undocumented by the same empire which displaced so many of them and currently economically and/ or militarily wage war against them.

Through all the pain, it was inspiring and uplifting to participate in many of the workshops throughout the weekend and learn the different ways groups are engaging in activism and creating dialogues to strengthen our commitment and deepen our work. Our sister Dr. Maha Hilal and brother Dominique Diaddigo-Cash blessed us with their workshop, “The War of Narrative & its Casualties,”which provided deep insight on the US’s history of reinforcing xenophobia to systematically oppress people of color and shape media and policy to further criminalize communities of color. The blatant connection between using Islamophobia as a means to illegally detain, torture, and kill Muslim families, along with the creation of a border to fine, imprison, and kill undocumented people who naturally migrated the continent for thousands of years, cannot be ignored.

The final evening of the SOA Watch Border Encuentro, we were reinvigorated and blessed by the words and music of so many talented artists including Rebel Diaz, Lengualerta, Olmeca, Lando Chill, Son del Centro, Francisco Herrera, Charlie King, and Cihuatl-Ce amongst others. We all danced and celebrated the gathering, knowing that we would be here again the following year, and all the years after that it might take, until our people are free.

We closed the SOA Watch Encuentro with a vigil where we read aloud the names of family members who either disappeared, or had been found dead or murdered at the border. The sun beamed down hard on us, as we slowly and intentionally chanted the names of those young people and elders, women, men, and children alike, killed or left to die for pursing what once used to be a very natural way and part of life. We raised their names up so that we may always remember them and the fight for a world where families are not separated and killed for being born on either side of a border.