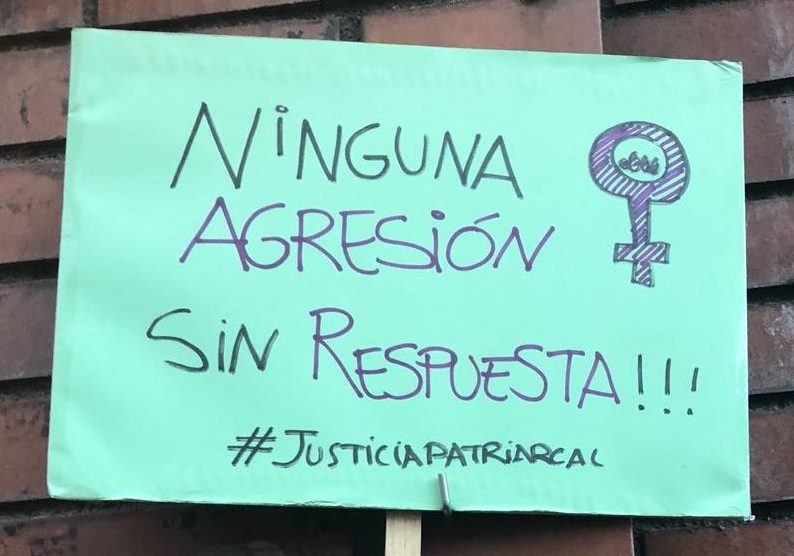 We had spent our week sharing spoken word poems, learning how to beatbox and break, and studying the connection between Hip Hop and the Civil Rights movements, when on the 3rd day of our workshop many of us found ourselves very impacted by a the court decision given that day. The hearing regarded an event that occurred 2 years ago where an 18 year old teenager was assaulted and gang raped by 5 men who called themselves La Manada, (The Wolf Pack), in the Sanfermines festival in Pamplona, Spain.

The judge declared that the 5 men were guilty of sexual abuse but innocent of sexual violation and rape. Some of the reasoning for this ruling is founded on the court’s definition of rape which excuses it as a crime if the victim does not use physical force to resist her aggressors. The victim, who did not consent to being recorded by those who gang raped her, had her eyes closed in the 7 videos while her assailants recorded and violated her. The judges deduced from the footage that the victim emoted no signs of discomfort, aversion, or displeasure and that the recordings (and the sharing of it) from her attackers were not a violation of her privacy either.

It is important to note that although the court definition for rape necessitates physical resistance, there are countless cases of rapists murdering their victims for the precise reason of physically resisting them. Thousands of victims’ bodies still remain missing today. The apparently obvious contradiction of the court hearing is that if a woman does resist being violated, she might wind up being murdered, and if she does not physically resist being raped, out of fear for her life, then the courts do not recognize the violation as rape.

The judgement is a dangerous declaration to men and all violators that raping or murdering a woman has little to no consequence. The 5 men making up part of the Wolf Pack have since served 2 years of their 9 year sentence which has currently been reduced to 5 years. These men might very likely be offered a reduction from the 3 years they have to serve to a 1 year sentence with good behavior and parole. This means that these men could possibly and will probably be free and back in society as soon as 2019. Some of these 5 men are also currently being tried for other cases of sexual abuse and violation that they are implicated in.

As some of the participants mentioned in the workshop, the true horror is not that this is an isolated incident of one young woman who was violated, rather that it is an act that occurs daily. In Spain, statistics show that there are at least 3 Spanish women who face rape daily. These violations often happen in partnerships and relationships as well, and are not reserved as random acts of violence from strangers alone.

That evening, some of the participants from the workshop left together to participate in a protest where thousands of women of all ages, races, sexual orientation, and credences gathered to express their indignation, their rage, and their need for urgent change. It was beautiful to see sisters accompanied by friends, partners, family members, and allies. It’s always beautiful to see the dynamic between a community grow from folks barely knew each other a couple of days prior, to new family supporting and uplifting each other. I was charged by the energy of these fierce women, sisters, and warriors and have taken that vibration to reflect on my own individual and collective contributions to our misogynistic, patriarchal, transphobic, and heteronormative society, and question what kind of brother I want to be in our society. 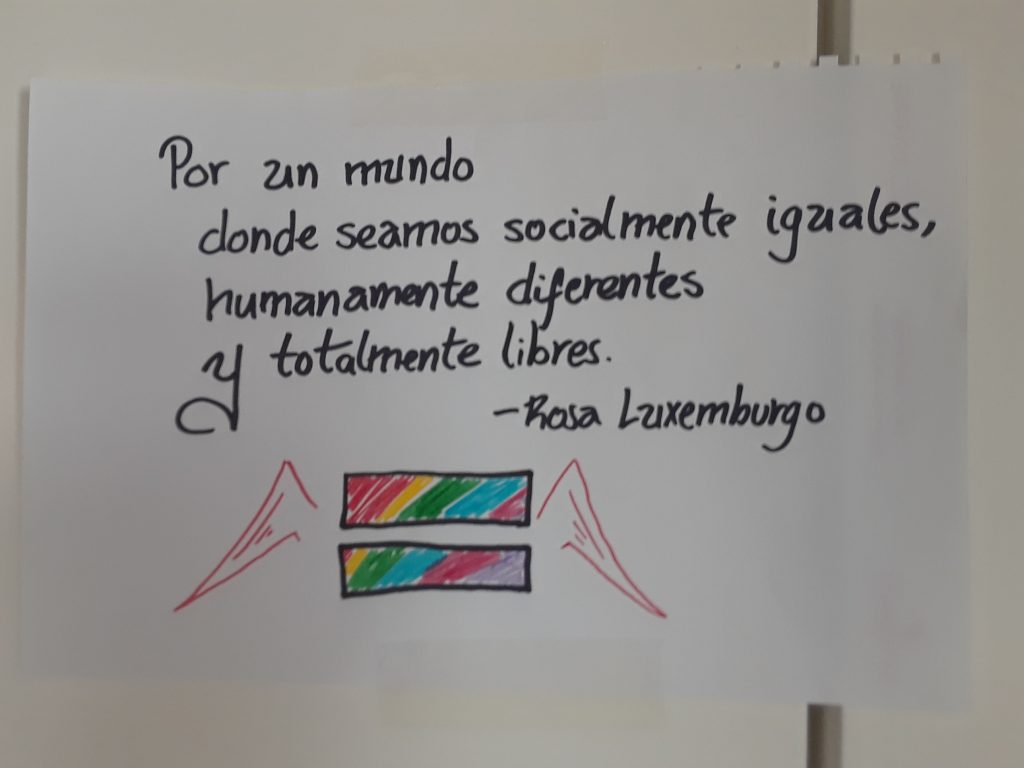 Winning the struggle against this system is not achieved through the expression of rage on one particular day. The reality of the everyday violence must be confronted and dismantled as we encounter ourselves in these daily interactions. These are the interactions that occur walking down the street, on the metro, in night clubs. The work consists of examining our conversations at work and in social gatherings, examining the thoughts and behaviors that we accept, tolerate, or ignore. The work consist of being critical of the apparently innocent media that we consume, planting its seeds of propaganda which bears fruit in our subconscious and lived realities. We must teach boys and men with a culture and an education that respects and values the lives of all sisters, and all the mothers and grandmothers who have literally given us life.

The last day of our workshop, we finished the cumulative process of taking pop songs and recreating and remixing them into versions that expressed our emotional and intellectual analysis. Participants discussed the subtle and direct ways in which the songs propagated the sexual violences practiced daily. They rewrote the choruses of the songs, added their own rap verses and poetry, scored their song with beatboxing, and added dance to accompany their message. We use the practice of creating in this way to make art which is relevant, has a direct message, and can be used proactively in the streets to accompany marches, protests, and social justice actions, and demand the change that we desire for all future generations. This is the work of saying, yes, we are and have been oppressed, but we are not victims; we have voice and strength, we have survived and we will continue fighting. 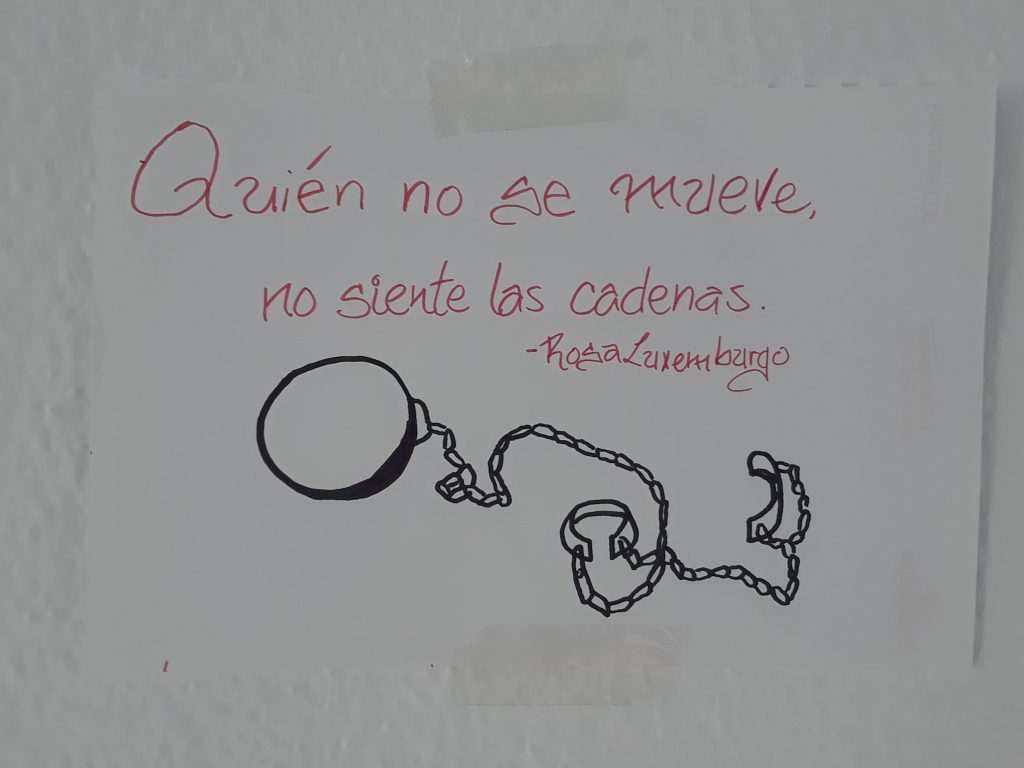 This is the work of love. The kind of love that believes that the child of every mother deserves to live dignified and have their humanity respected. It is the revolutionary love that Mamie Till Mobley had for her son Emmett Till. This is the love of Hip Hop in action, and I’m so proud to have connected with new family that has allowed me to continue further humanizing myself.